The power of suggestion.

When you type "Margaret Sanger" into any search engine (besides Google) the Autocomplete suggestions for Yahoo, Bing, Aol and DuckDuckGo include terms like "racist," "Negro Project," "eugenics," "KKK," and "colored people," among others. 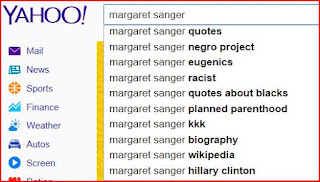 The Google Autocomplete, however, will suggest none of those terms to finish a Margaret Sanger search.  Instead, the Google search engine suggests "apush," "speech," "award," and "books."

Of the mere four words suggested by Google, only the term "award" is suggested by any of the other search engines.  We just find this strange.  What is the purpose of Autocomplete?  To help users find what they are most likely thinking?  Or is it to tell users what Google wants them to think? 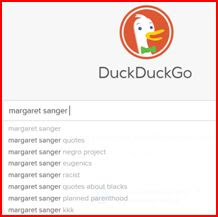 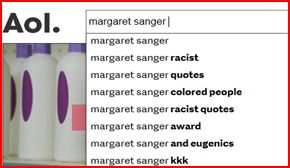 In her autobiography, Margaret Sanger states:

"I accepted an invitation to talk to the women's branch of the Ku Klux Klan...I saw through the door dim figures parading with banners and illuminated crosses...I was escorted to the platform, was introduced, and began to speak...In the end, through simple illustrations I believed I had accomplished my purpose. A dozen invitations to speak to similar groups were proffered." (Margaret Sanger: An Autobiography, P.366)

After the Klan rally, she states "a dozen invitations to speak to similar groups were proffered."  Why was the KKK so enthusiastic about Sanger?  And as is well documented in our sidebar, Margaret Sanger is well know for a series of racist quotes.  Were some of the Margaret Sanger quotes used at Klan rallies?

(See 10-Eye-Opening Quotes From Planned Parenthood Founder Margaret Sanger from LifeNews.com.)
As demonstrated by the suggestions from the Autocomplete in all the other search engines, internet users are very curious about the racist past of the Planned Parenthood founder.

So why the strange suggestions from Google?

Posted by Tully Becket Flynn at 6:11 PM 123 comments: Links to this post