Prolife leaders are asking that the first week of October be set aside to recall the fact that Margaret Sanger, the founder of Planned Parenthood, spoke at Ku Klux Klan rally. As stated in her autobiography:


"I accepted an invitation to talk to the women's branch of the Ku Klux Klan...I saw through the door dim figures parading with banners and illuminated crosses...I was escorted to the platform, was introduced, and began to speak...In the end, through simple illustrations I believed I had accomplished my purpose. A dozen invitations to speak to similar groups were proffered."

*A black baby is three times more likely to be murdered in the womb than a white baby.
*Twice as many African-Americans have died from abortion than have died from AIDS, accidents, violent crimes, cancer, and heart disease combined.

*Every three days, more African-Americans are killed by abortion than have been killed by the Ku Klux Klan in its entire history.

*Planned Parenthood operates the nation's largest chain of abortion clinics and almost 80 percent of its facilities are located in minority neighborhoods.

*About 13 percent of American women are black, but they submit to over 35 percent of the abortions.


Please help highlight this historic event by reposting, blogging, tweeting and even discussing it with friends all next week! 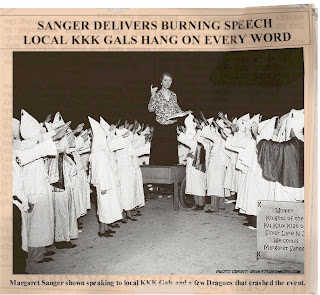 The racist founder of Planned Parenthood, Margaret Sanger, spoke at Ku Klux Klan rallies.  Enough said.  Why are our tax dollars still funding this out fit?
Posted by Brother Declan at 7:55 PM 10 comments:

I have been getting a lot of e-mail concerning the Margaret Sanger Art Contest.  We will kick it off again very soon.
Posted by Brother Declan at 11:50 PM 5 comments: